UPDATE: The sale is now over! To read how much we made for this great cause during this special promotion, read the next blog post here.

All the money made from every product purchased in our store for four days, up until Midnight Monday 26th 2012, will go to the Spanish NGO unoentrecienmil.org and its ‘Proyecto Corre’.

We’ll let you know on Tuesday 27th how much we’ve raised from all of your purchases. Your Spanish improves, and unoentrecienmil.org receives a valuable donation. 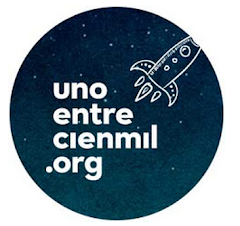 We recently discovered that a boy in our son’s class, Guzmán, was just about to finish 2 years of treatment for Leukaemia (leucemia linfoblástica aguda). And it looks like he’s going to be OK – He’s now one of the healthiest looking children I know!

When his father, Jose, first discovered his son’s illness he was overcome with the idea that this was an opportunity to do something powerful in the world. Today, 8 out of 10 children survive this kind of Leukaemia, and Jose decided to start a foundation to raise money for research that can eventually save the other two children too, so that 10 out of 10 survive.

To read the moving story of how it all happened, of how the idea came to him and the foundation was born, read Jose’s blog post here.

Last month, The Foundation Uno Entre Cien Mil was officially launched, along with Proyecto Corre – an innovative idea to help raise money for this great cause. Proyecto Corre aims to get 100,000 people to download a badge (un dorsal) to wear when they run, whether you are a confirmed jogger or just run for the bus! You make a donation from 1 euro, and the badge is sent to you by email to print out.

Every year Marina and I like to use some funds from Notes in Spanish to help good causes, especially causes that are close to home and close to our hearts. As soon as we heard about Guzmán and his dad’s project, we knew we wanted to help. I’ve got my running badge (for bus-stop dashes only, me and jogging don’t mix!) but we wanted to do something bigger from here at Notes in Spanish too.

So every euro and centimo from our store for four days, from Friday 23rd November until the very end of Monday November 26th all over the world, will go to unoentrecienmil.org and Proyecto Corre.

Your Spanish wins, and investigation into childhood Leukeamia wins.

Thanks so much for helping us with this,

UPDATE: The sale is now over! To read how much we made for this great cause during this special promotion, read the next blog post here.